A delightful one Santa Claus crafts for children to do handicrafts with colored pencils and thread. It’s fun to play with or hang on the Christmas tree.

I’m so excited to share this cute little Santa Claus craft with you today! With all of the Christmas handicrafts we’ve done here at my daycare over the years, we actually haven’t done too much Santa Claus handicraft. We did that Santa Craft crayon but the other day, and it’s so cute we just went out to show you guys. 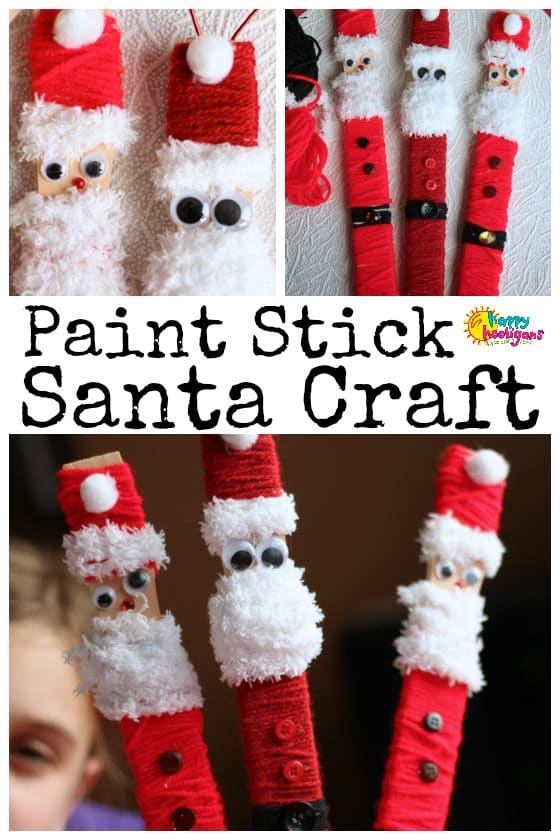 The idea for this yarn-wrapped Santa Claus arose from the colored pencil dolls wrapped with yarn that the hooligans regularly make. The girls love to do these with scraps of thread and fabric.

When I was recently planning our Christmas crafting day, I discovered a ton of unused colored pencils and thought it would be fun to turn them into Santa Clauses, much like we make our dolls.

They’re a bit like our popsicle Santa Clauses, but we didn’t use yarn to make them. We just painted the popsicle sticks. 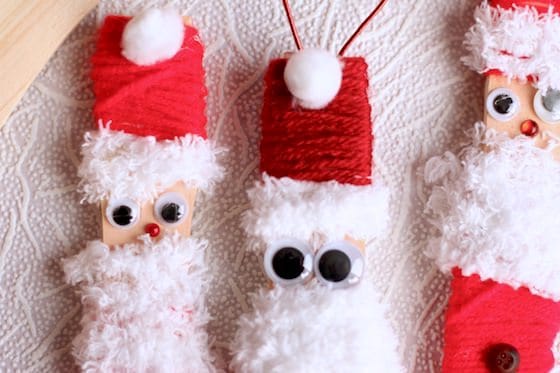 Since the colored pencils are wider and longer than the popsicle sticks, there is more space to get a little more creative. So I grabbed the yarn and the googly eyes and a few other goodies and we were all done.

Accessories for a paint stick Santa 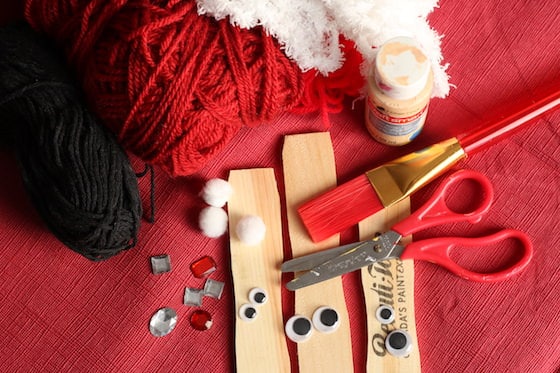 To involve the kids in the planning process, I had them use a pencil to mark the blocks of color on their colored pencil for their Santa’s hats, faces, belts, and boots. That way they could get a good idea of ​​the proportions and know where their colors would go if they used the color and yarn. 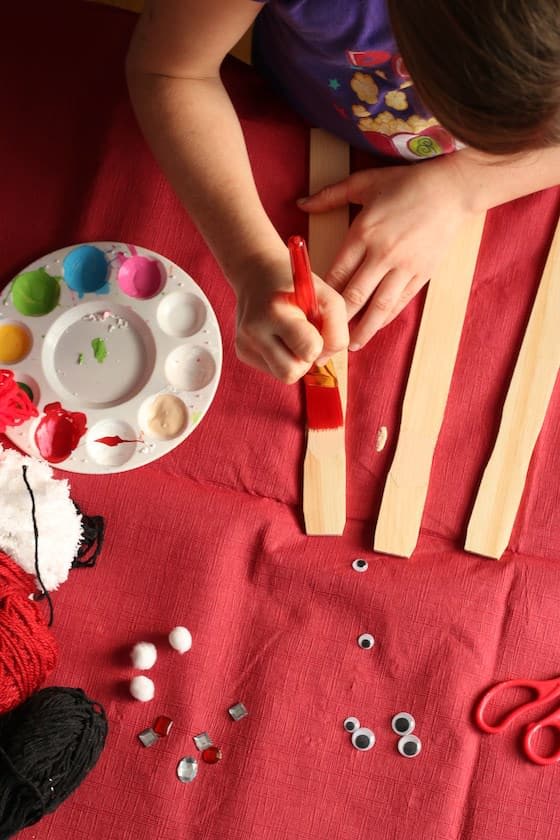 They started by painting the faces of their Santas. Note: This step is not really necessary. When we started painting, we found that the flesh-colored color wasn’t too different from the color of the paint stirrers and that we could actually have left the face area unpainted. Well, painting is always fun, isn’t it? 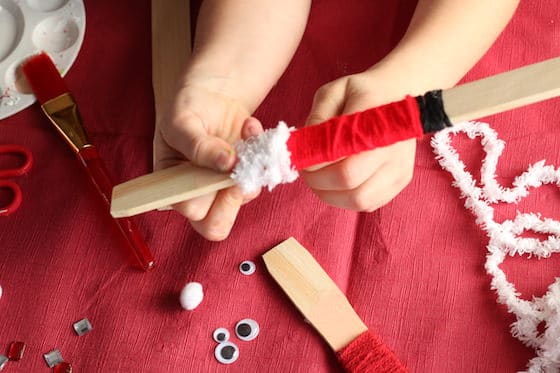 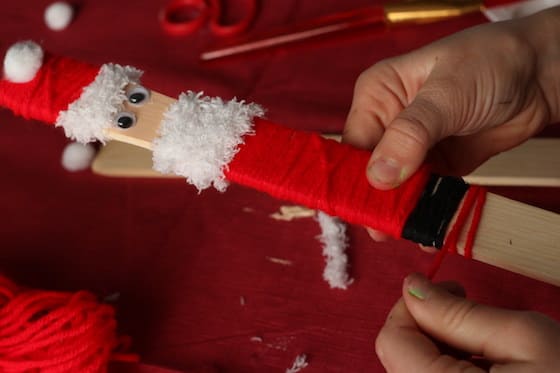 Next step: the yarn. The children cut long red thread for Santa’s suit and white thread for his beard and the trimmings of his hat. We were lucky enough to have some fluffy white yarn that was perfect for the job.

When you start wrapping you can tape your first piece of yarn in place, but we didn’t bother. We just held the loose end against the colored pencil and wrapped it over it to hold it in place.

The children wrapped and swaddled and covered the colored pencil with their thread. When they were done with one color, they cut it off with scissors and attached it to the back of their Santa Claus with some glue.

When they had wrapped enough that Santa’s suit, boots, belt, and hat were ready, they glued a bobble to the top of the Santa’s hat. They ended with some googly eyes and a craft jewel for Santa’s belt buckle. When there was enough of Santa’s face peeking out from behind his beard, they glued on a little red craft jewel for a “cherry nose”. 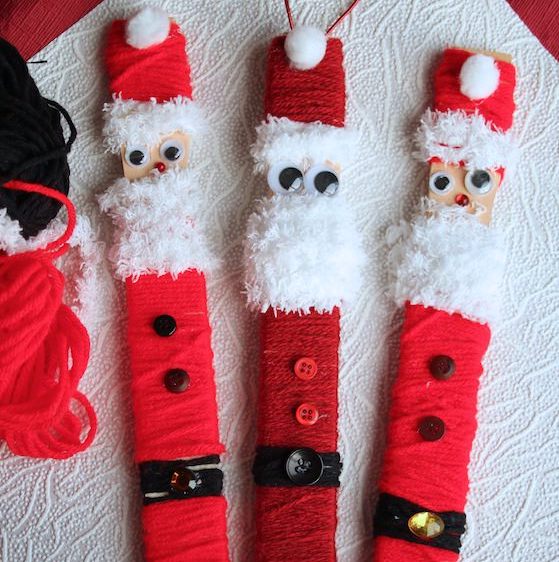 Now the kids can play with their crayon Santa Claus or stick a loop of yarn and hang him on the Christmas tree! 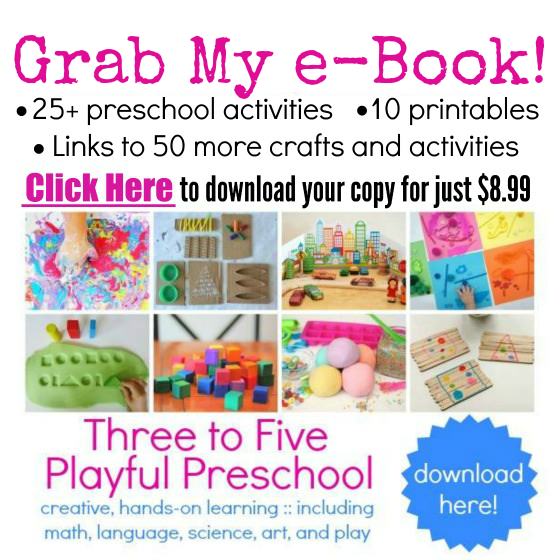 Jackie is the mother, wife, daycare and the creative spirit behind Happy Hooligans. She specializes in children’s crafts and activities, simple recipes, and education. She started blogging in 2011 and today Happy Hooligans inspires more than 2 million parents, caregivers and young professionals around the world.